If you follow me on Twitter I am sure you will have noticed that the kids (and I) have a new obsession: Horrible Histories.

Orlaith already loved the books. She’s a big non-fiction reader and always has been. She is often to be found with her face buried in one of the kid encyclopaedias or the many 100 Facts About… books that we have scattered about the place. Jake managed to find a set of the HH books for her as a special treat and she adores them. Even Esme will allow me to read to her from them, although notably only the bits about Cleopatra.

(Bloody princess phase. I cannot WAIT for that to be over. Although I do love that she tells me that when she’s grown up and a princess, she will be rescuing HERSELF, not waiting around for a silly prince to come along. That bit is awesome.)

We’ve only relatively recently discovered the HH tv show but we’re huge fans. It’s wonderful to have a children’s programme that I can watch with my kids and not find myself grinding my teeth halfway through. (Abney and Teal is excellent but I find most of the output of CBeebies excruciating. Everything’s Rosie? Is it f*ck.)

Even Elias loves it, or the song portion at least. He asks for the “Cuti song” sometimes after the older owlets have headed to bed. It is only a matter of time before he learns all the words and sings it on the way to school pick up, I am sure.

One of the episodes we saw recently featured a song about the Suffragette movement which the girls had lots of questions about. Some of what we talked about obviously stayed with Esme as have a look what she created the other day when we found some peg dollies:

Yeah, the colours are all wrong and I made the sign for her as she hasn’t quite learned to write whole words yet but it’s a start! She informs me that Emmeline Pankhurst is the one on the right with the enormous orange hat.

Look at this proud face:

This one is apparently Emily Davison. Before the incident with the horse, obviously.

Elias made his own peg dolly crew as well but to be honest he was mostly interested in decoupaging the table and the pen box and his own legs with as many sequins as his chubby hands could grab. 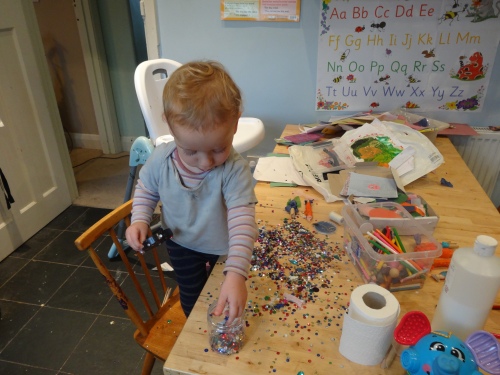 More sequins than you could poke a stick at. Not sure what the suffragettes would make of all this but you’ve got to start somewhere!