Sooo. That Christmas thing, how’d it work out for you guys? Good? Good. Me too. 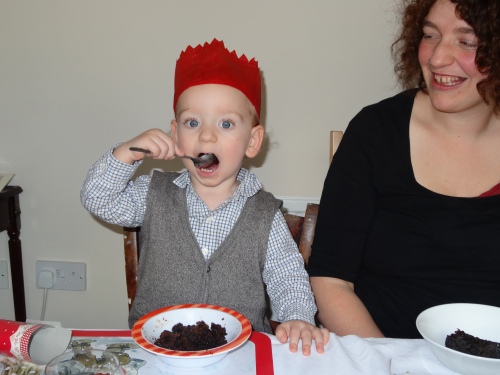 And then there was that whole deal with celebrating some other big seasonal doo-hickey. Something about a new ear or something? Midunno.

Anyways. Here we are, mid-January already and I haven’t bothered to write a single post so far this year. Incredibly lax. I didn’t even tell you how the Christmas markets went or bore you to tears with photos of my kids opening their presents and wrestling each other to death over the crackers. Slack.

Mostly what I’ve been doing is adjusting to the fact that Esme has now joined Orlaith at school and it’s just me and Elias at home most of the time. (Except for those frequent times when one of the girls is plagued by lurgy. Speak not to me of tonsilitis.)

It’s a good change though. She was ready for it, even if I was not. She needed more stimulation than I was able to give her and most importantly, she needed another adult in her life.  She thrives on adult companionship, that one, and she was desperately missing her preschool teachers. I’m not even going to try and unravel the tangled web of why she wasn’t in preschool for the last few months, just know it was all rather traumatic and very sad and leave it at that.

Anyway, whilst she has always rejected my best efforts to do reading with her, she *loves* doing reading with her new teacher who she already idolises. She came home with a very simple reading book the other day and she read it to me from go to whoah. I wasn’t sure how much of it is memorising and cribbing from the pictures but that’s how reading begins anyway so I made a HUGE fuss of her and petted her like crazy.

Wanna see a picture of her on her first day? It’s pretty much obligatory for a post such as this to be accompanied by at least *one* schmaltzy photograph of your kid in her uniform. Go on.

Oh, those faces. I love those little faces.

Anyway, she’s going at it with her customary gungho enthusiasm accompanied by some rip roaring morning tantrums ove rhaving to wear things like underpants and socks. Oh and a jumper that someone else has proscribed she must wear. She doesn’t do well with authority, that one. I can’t say I really blame her.

She comes home with tales of her doings at school with mysterious new children called things like Honor, Rose and Polly and singing me new songs about space. She’s learned the names of lots of 3D shapes and takes great pleasure in pointing out to me all the things around us that happen to feature those shapes. And she tells me she’s going to be either a hair dresser or an astronaut when she grows up. Good to know she’s keeping her options open.

In non-sprog related news, the Christmas markets went well and I had a blast with my friend Emma. We were right next to some othe rfriends of ours, Elen and Emily which was lovely. It was cold but not ridiculously so and the new bits and pieces I made sold reasonably well. So I’ll definitely be doing some more general markets this year, now that Elias is that bit older.

Been knitting a bit.

I’m on the second one of these.

I know I always pimp Anna’s patterns but I do love these socks. This is the second pair I’ve done and I rarely re-visit a pattern. It has to be something fairly special to make me go back for more. The only other socks I can think of that I’ve knitted more than once are Froot Loops.

Been sewing a bit. Few new bags for the shop:

I’ve made a bit of a start on my Unravel preparations. Got loads to do because the Christmas period was ridonculously busy and I sold a lot more stuff than I realised. Sometimes it just creeps up on you that you’re actually way lower on stock than you thought. And then you hit the panic button and sew for the next million years. Or is that just me?

Other than that I’ve mostly just been enjoying the kids and the snow.

Have to say though, not loving the snowman so much. Seriously creepy snowman. I actually had to shut the kitchen blinds last night because he was staring in with his shadowy snow eyes.

I’m not sure what is creepiest about this dude, the eyes or the nose. Noses shouldn’t be scary but nor should they be bright green and made of metal. His nose is just… leering at me.

A belated happiest of New Year’s to you all and I hope it’s treating you well so far. I will endeavour to be somewhat less slow to post but I make no promises.