Things to do while attempting to etc Part 3

By which I don’t mean I ‘ve been doing my laundry over and over again with a heavy focus on foot apparel. Because that would just be odd.

Instead I’m referring to the other repetitive activity I like to indulge in with regard to socks: knitting them. Because making footwear out of sticks and strings is incredibly soothing and not in anyway odd or eccentric.

One of the things I’m missing most about the UK (other than the obvious things like family) is the knitting group I used to (haphazardly) attend. I only ever got to go sporadically but they’re such a lovely bunch and it was always a joy to sit in the pub, freaking people out with our needles and pins, cackling at filthy jokes.

Another one of us has recently moved back too and suggested we start a sort of virtual knitting group with a knit along project. I’ve never taken part in anything like that before but it was so lovely to be chatting with everyone, seeing photos of people’s progress on their socks (and other projects. Because I don’t really know any project-monogamous knitters.) 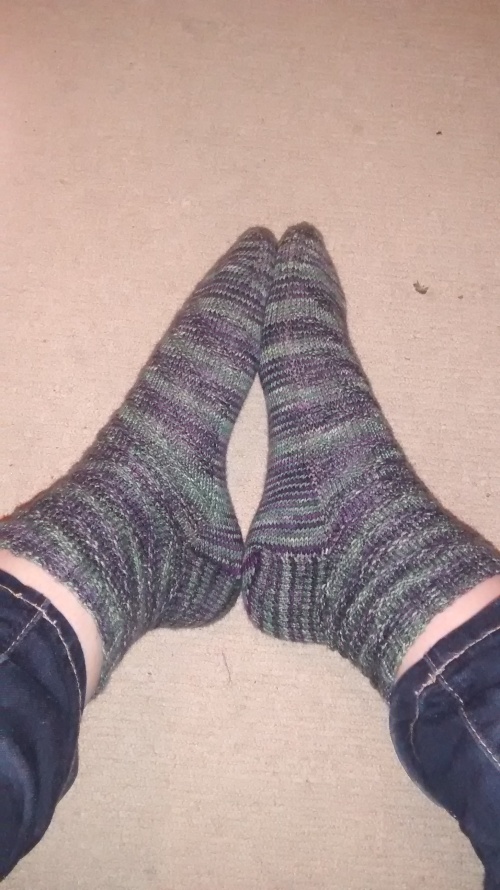 The colourway is Mathematical Camel Spit from a club The Knitting Goddess and Coopknits did a few years ago, all Terry Pratchett inspired colours and patterns. Bonus points for comments with the camel’s given name 🙂 (Warning: Bonus points count towards nothing other than a smug sense of self-satisfaction.)

I was working on these when Sir Pterry passed away and it felt oddly comforting.

And we’re back to the cardboard. I did warn you that I’m obsessed.

You can blame this one on the fact that after a couple of months of toiling to cut sub-tropical undergrowth with my little push along lawnmower (I named her Rosinante) we finally splurged and bought a petrol powered one that can decimate pretty much everything in its path.

It also came in a really nice box.

Elias has been missing his little playhouse from back home and he asked if I could make him a cardboard house. I was pretty sure I could build him something and a quick hunt on google yielded loads of inspiration and so we set to and built this: 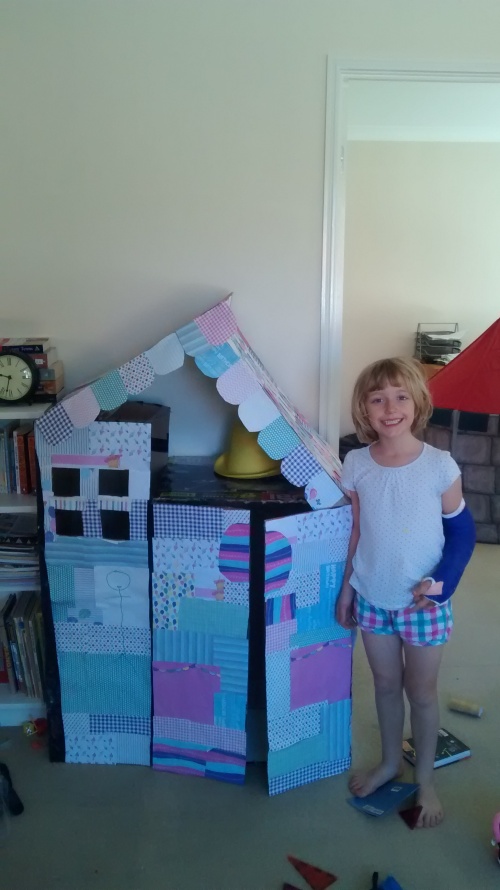 Bonus Esme included for scale. The house is big enough that two of them can get inside at the same time.

If you want to build one of these, at a minimum you will need 1 large box for the main part of the house, 3 or 4 smaller boxes to make side towers and some extra bits for the roof.

To hold everything together you can either reinforce your joins with glued on cardboard braces (like I did for that Fire Nation boat. Think rectangles of cardboard, creased in the middle so they bend at right angles, then glued so they hold to both sides of the join.) Or you can use some form of tape. I used duct tape for this one but I think if I did it again I’d want something with stronger adhesive qualities as duct tape, by nature, can pull away quite easily.

To decorate it, you need the inevitable hot glue gun and your choice of paper or whatever. Some people use wallpaper remnants or wrapping paper. I used some discounted scrapbooking paper we found in one of the big shops here. Elias picked the colours. And on one side instead of decorative paper, I used some stick on chalkboard paper so the kids can use their chalk on it.

I’d also recommend that you grab yourself a stanley knife (boxcutter?) because working thick cardboard with just a pair of scissors is painful on the hands. You also get greater precision for cutting features like windows if you’re using something like a stanley knife. 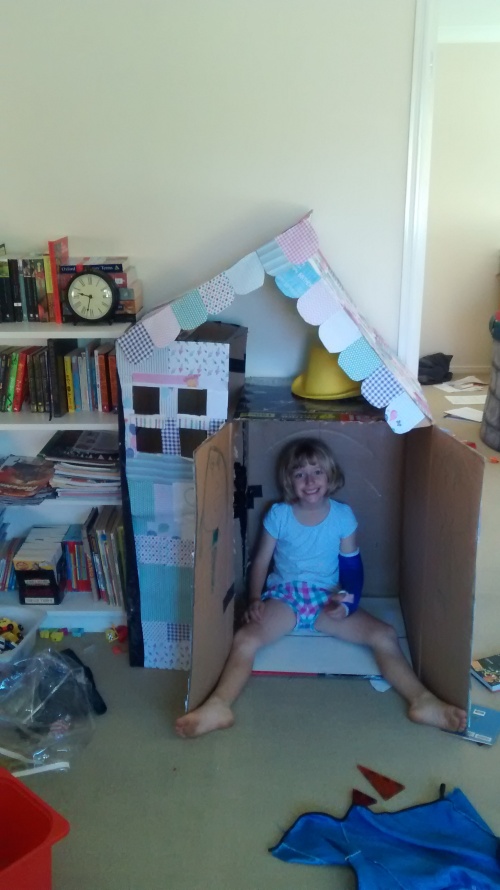 If you look past Esme’s enormous grin, you can see the duct tape that’s holding the whole thing together. It’s probably a metaphor for something, right?

The roof’s a bit rough and I ran out of glue sticks before I’d finished covering the whole structure in paper, so in places the box is still very visible. And I left the walls inside bare so the kids could scrawl all over it and make it their own.And the duct tape isn’t that strong – the structure has a definite wobble at times.

But I must admit I feel quite proud of it – it’s the most ambitious thing I’ve built yet and amazingly, it’s still in one piece after a couple of weeks of rough-ish play.

And it was enormously satisfying to make. Quite physically demanding – lots of slicing, chopping and puncturing of cardboard on this one. Working out the mechanics of the structure, figuring out how to make the bloody thing stay together, where and how the tape should go to bind it and where it needed reinforcing. The endless quiet repetitive task of shredding the paper and glueing it on to make the patchwork outside. Cutting and shaping the paper to make roof tiles, arranging them in pleasing combinations, all just overlapping, until the roof is suddenly a roof and at the end, there it is, a little house.