Of Buttons, babies and… tea cosies?

Not the most alliterative post title ever, I know. But it succinctly encapsulates what’s shaking around here so it will do very well.

I’m up early with Elias who has one of those sudden high fevers that seem to blow in from nowhere and leave kids limp, hot and miserable. Hard to believe that a few hours ago he looked like this:

Treating you to one of his special ‘cheesy grin’ poses here.

He’s not asleep, just laying quietly on my lap, whimpering a little. It’s about the best place for him, comforting and warm and right next to his favourite snack of choice – me!

Since I can’t really do much else and I can’t go back to bed as he gets restless and whingy if we lie down, the obvious thing to do is write a blog post!

Back in the day, if it was Orlaith who was ill with a fever like this, I’d’ve been wringing my hands and wondering about hauling her down to A&E but after three of them you kind of get a sense for when to panic and when to just reach for the paracetamol and wait.I’ll take him up to the doctor’s in the morning if he’s still all hot and bothered and he’ll turn out to have an ear infection or a bit of a chest infection or an indefinable virus. I view it as a good thing in a round about way as whilst he’s miserable now, he should have an immune system like a bloody Kevlar jacket by the time he’s old enough to go to school!

But I digress. Shiny things and craft stuff. Stay focused.

I’m busy getting ready for Ladywell Christmas market, if you haven’t noticed the prolific amount of tweeting I’ve been doing about it.

General craft markets are something I haven’t really done for a while. I tend to focus on the knitting/crocheting accessories side of things  and my time is so limited that finding extra time to branch out and make stuff for *whispers* non-knitters/crocheters/spinners is just too much. But it’s Christmas! It’d be rude not to join in the fun. So I’ve been trying to come up with some lovely things to make for people who, for some bizarre reason, don’t knit!

Which leads me to tea cosies.

A simple thing, the tea cosy, but often so bloody drab. Why does something utilitarian have to look utiliatarian? Why can it not be beautiful and brightly coloured and even, heck, covered in robots?

Robots? Yes, robots. What? Just cause they don’t drink tea doesn’t mean they can’t appreciate how important it is to keep it properly heated.

I’ve made eight of them so far. They’re all lined with my usual brightly coloured cotton in a variety of eye watering shades. I went the whole hog on these and they have a special insulating wadding that’s specfically made for making stuff like oven mitts so I figure it should be up to the job of keeping tea at the correct temperature. I got it from here, they delivered within a day or so of ordering it, all nicely packaged and ready to use. Rather impressed!

But tea cosies alone do not a craft stall make. It’s always nice to have some little brightly coloured flotsam and jetsam that people can pick up as stocking fillers. I’ve got all the jewellery I’ve been making but I’m all about the fabric. I like bright colours and soft textures and buttons. So I picked up a couple of packs of wool felt flower shapes and some gorgeous buttons and went to work. 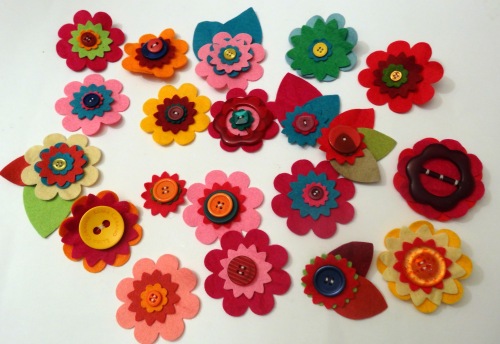 They’re rather good fun to make. I love playing around with the layers and I think the buttons just make them POP even more!

There were some lovely buttons in the pack. Some lovely completely over the top enormous ones and some with really interesting texture like the orange one on the right in the above photo.

I think these two are my favourites of the ones I’ve made and certainly they are the most ‘me’ in terms of colours. Plus I love that big red swirly button!

The pack of buttons I got was extremely generous and I’ve got heaps left over, but what to do with them? Luckily, Elias is happy to help out on that score. He loves buttons and so, as it turns out, does his friend Robot.

A boy. A robot. What could possibly go wrong?

Could this rotund jolly plastic fellow look any more sinister?

I must apologise for the slightly leery photo of the robot. It turns out it’s pretty much impossible to photograph a robot with a belly full of buttons without it looking like it’s winking drunkenly at you in a dirty macintosh. Apologies.

It took me a good half an hour to get all the buttons out again. It doesn’t look like there are that many buttons in the robot, does it? And that’s because they’re all hidden inside the plastic casing at the back, waiting for me to spend 30 minutes cursing the person who designed the robot whilst shaking it upside down and hoping like heck to get lucky. Much to Elias’ amusement and delight, of course. 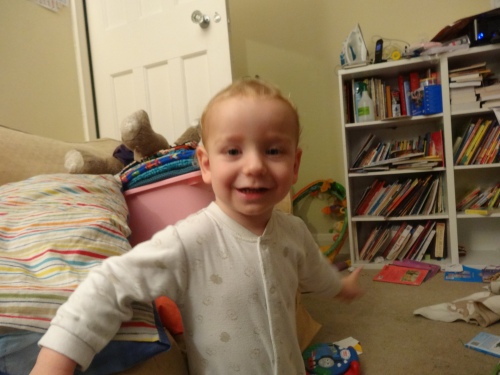 Hopefully he’ll be back to grinning like this again soon, poor chap.