Yarndale – Anatomy of a festival stand

What a fantastic weekend it was.

It was insanely busy as has been documented elsewhere. We couldn’t quite believe how many amazing stallholders and lovely ticketholders there were.

As usual I barely left the stall. It was just so packed that there wasn’t a spare minute to think about anything other than serving people and trying to move out of the way so I certainly didn’t get any time to take photos of other stalls.

So instead I thought I’d show you a sort of time line of what it’s like to build the stall. It’s not much compensation but it might give you an idea of what a show is like from the other side of the table. 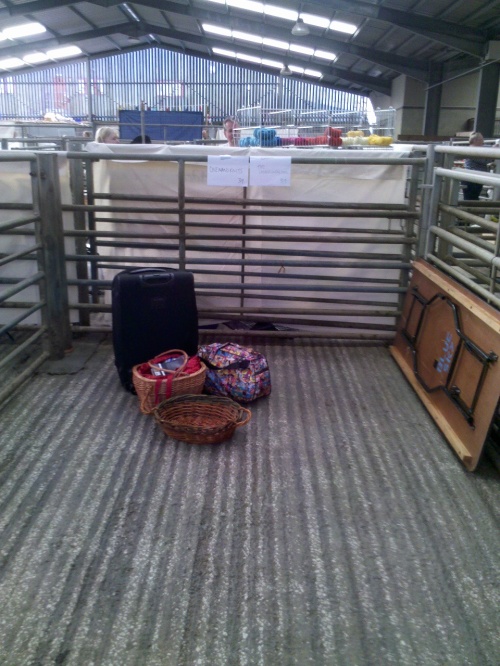 I got to the Auction Mart at about 3pm. This is the bare bones of the pen when I arrived. In that suitcase is the entire contents of my shop barr the table coverings.

First step is always to get the table or tables laid out in the right configuration. You have to think about how you want people to enter and browse your stall. What kind of atmosphere are you creating? Do you want people to come all the way into the space? Are you going to wander freely to help people browsing or are you going to stand behind your tables? What kind of message does that send? If you have other equipment, where does that need to stand in relation to the tables?

We had two tables and a clothes rack to play with.

We decided to have the tables pushed to the back and sides in an L configuration with the clothes rack down one side. We dressed the sides of the pen with our velvet backdrop cloths.

You can see Anna’s sexy disembodied leg sans its usual TARDISock in the background there. It always makes me giggle.

The clothes rack was a huge boon this weekend. It gave Anna somewhere different to hang her dummies and people seemed to really like being able to browse the rack and touch the samples. It definitely seemed to make a difference to how people responded to the patterns. 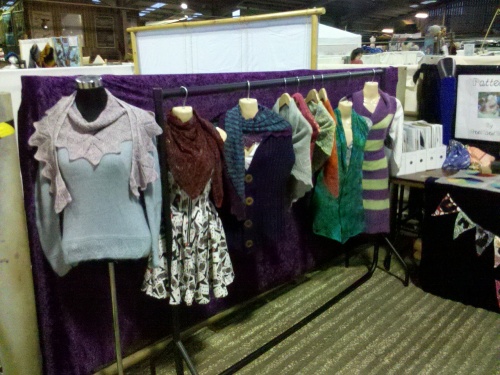 We used the velvet to pin some of Anna’s samples. The dark colour makes it a really good background for some of the lace.  Here you can see part of one of Anna’s new designs – the re-vamped and simplified Zoe – lite shawl – pinned out across the back. The blue shawl underneath is the TARDIShawl, another new design.

We also had the original sample for Anna’s pattern from Knitty “Easy as Pi” plus a basket of yarn dyed exclusively to go with some of Anna’s patterns as kits. The cardboard magazine boxes were a new addition too and they made a huge difference as well. It made it so much easier to find patterns in a hurry when serving people. With the clear labelling that Anna had put in place, it was actually quite easy for customers to be able to browse for themselves and find what they wanted quickly.

Anna also had a lovely new set of patterns on the stand this time around which she was selling individually and as a collection:

Baker Boy hat, Curlicue mittens and the Wuthering Heights shawl. All gorgeous seperately and really quite perfect as a set. All of Anna’s gorgeous patterns can be found here, by the way.

I was sans my usual pair of shoe racks this weekend as I caught the train up and back so I had to makeshift quite a lot to make any kind of attractive presentation. I really struggled, to be honest. I like building my stuff in layers, putting height on the stand to draw the eye to different sections. I often use string to create washing lines. It’s nice to be able to hang stuff up.

I decided to just go for stacking and spreading stuff out. Anything that I could hang up, I did. I pinned some stuff out across the side panel for demonstration purposes.

By the middle of the weekend I’d lost the stacks and just gone for puffing the bags up and standing them up in lines, puffing up new ones as others sold.  I figured it should make people feel comfortable rummaging.

I had a couple of baskets with me, I used them where I could, mostly for displaying flat things like the needle envelopes and organisers.

Stitch markers are always the easiest thing to display. 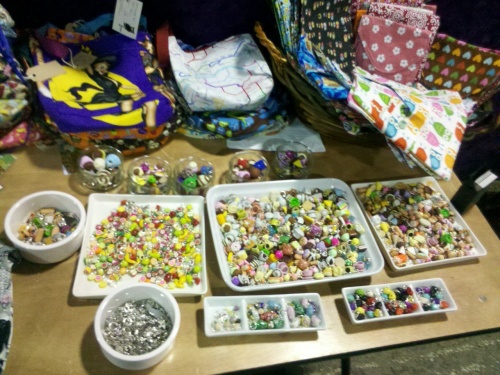 Nice flat dishes or little pots scattered across the front of the stand. Bright, colourful, small, easy to rummage through and pick and mix. Having them right at the front makes them easy to see from a distance which seems to draw people in to the stand.

By the time we were done at about 8pm this is what we had:

Not bad for about five hours work.

And that’s for a relatively simple stand. On some stands people were building incredibly complicated displays with shelving units or themes. That stand next to us for Baa Ram Ewe must have taken forever to put together – they went with a Narnia theme complete with lamp post. Amazing!

Favourite moments from the show:

It was a lovely weekend over all. We were all totally knackered by the time we were done, customers and vendors alike.

Striking the stand always takes way less time. I don’t know about other vendors but I am always so tired that I put things away a bit higgledy piggledy so that I don’t miss the deadline for being out of the venue – and so I can get home as quickly as possible and sit down! Even with all the fiddly little things like stitch markers that had to go back in their cases, I still managed to make the train back to London by 5.15 on Sunday night. I think that might well be my fastest take down ever but it was aided by knowing that the kids, Elias especially, were really missing me and I knew that if I didn’t get that train there was no way I’d be home in time to say goodnight to them for the first time in three days.

Then once you get home, there’s no time to put your feet up for long. You have to make the most of having been at the show and met all those people who may not have bought anything from you but who have taken your card. They might have been weighing up whether or not to buy and post-show they might want to check you out again. So as you can imagine getting my shop back online is a huge priority.

It also gives me a good idea of what’s sold at the show – sometimes that can be a surprise. Something that has sold amazingly well at one show might not do so spectacularly at another and then something that you’ve had no luck with before suddenly takes off. One of the joys and frustrations of doing thing.

I’ve spent most of the last two days stocktaking, re-organising stuff like stitchmarkers so I can see where everything is and then photographing it all. I’ve taken and edited well over 200 photos in the last 24 hours so I can get the shop back online as quickly as possible. Most of it’s now in the shop but I still have a bunch of stuff left to do and I want to have a good tinker with the layout of the shop too. I’ve spent some time re-photographing stuff for the umpteenth time because sometimes the photos don’t come out quite right or they get accidentally deleted.

And that’s it. That’s a kind of behind the scenes of what it’s like to set up and work on our stand during the show and afterwards.

If you came along to the show, I hope you had a wonderful time. I know I did.